A Cultural Landscape Not a Development Area

Chinatown is both a nationally recognized historic district spanning Pender to Gore with its distinctive and unique Society buildings, and it is the surrounding business district which maintains the area’s traditional retail of bbq meats, fruits, vegetables, and live fish. Together they form a cultural landscape that ‘provides the vitality and living colour that gives Chinatown its distinctive character.’

Neighbourhoods and communities do change and evolve and while no one wants to see Chinatown preserved as a theme park-like environment (we come close enough with the dragon street lights, the ginkgo trees and the ‘village’ street-style sidewalk paving patterns) the community deserves a careful, well thought out planning approach that builds upon the existing neighbourhood’s unique and quirky streets.

However as they stand now the proposed zoning revisions offer a conflicting vision for this important neighbourhood. On one hand there is a set of guidelines that riffs on the area’s pattern of development while the other promotes over scaled frontages and heights that threaten the very elements that makes Chinatown interesting.

Why not step back and look at Chinatown through a different lens; that of a cultural landscape. As defined by UNESCO, a cultural landscape is “that of which retains an active social role in contemporary society closely associated with the traditional way of life, and in which the evolutionary process is still in progress [and] at the same time it exhibits significant material evidence of its evolution over time.” With this in mind, a more holistic approach to Chinatown which included retail retention, incremental development and new residential space within the existing fabric would begin to build a complete community.

In that light, the proposed revisions to the zoning that respond to the existing building pattern offer a really good starting point. For Pender Street, the revisions acknowledge the significance of its built form and pattern of retail which makes up the core of the HA-1 zone (also the boundary of the National Historic District) with an outright 3.75 FSR, and a 50 ft. height. The conditional FSR rises to 5.45 providing 7 floors within a height of 75 ft. These revisions along with the maximum 50 ft retail frontage for new construction works well for the street. All that’s missing is some encouragement to create opportunities to reanimate the historic Market Alley with new retail opportunities.

Outside of Pender Street, the proposed revisions offers a fine grained approach for future development calling for a 6,5 FSR with 8 floors within a height of 90ft. Street frontages are set to a maximum of 75 ft., (In an ideal world the maximum frontage would be 50ft. providing two 25ft. store fronts) while maintaining a maximum 50 ft. shop frontage. 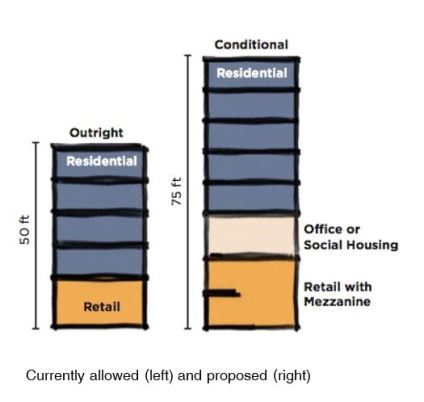 There are other welcome adjustments in building form including the retail with mezzanine requirement and the second floor commercial which could be social or seniors housing. There is even a modest bonus for laneway retail which over time could evolve into an intriguing set of secondary streets. This could be the start of providing a framework for the entire neighbourhood outside of the Pender Street core, including Main Street which has enough over-scaled development already.

Along with the above there are a few simple measures to help the area including:

Chinatown speaks to a larger and more complex history of migration, survival and adaptation and it deserves careful consideration, care and attention, there’s more to revitalization than just tinkering with the zoning.