Sept. 1, 2016 – Translated from 明報 Ming Pao (thanks to Youth Collaborative for Chinatown volunteers!!) 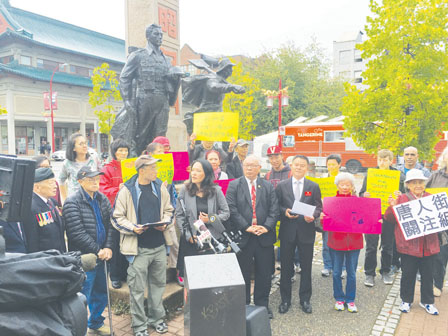 Chinese Member of Parliament Jenny Kwan and several new and old Chinatown organizations have gathered together to vocalize an appeal for three levels of government to work together to purchase a site directly adjacent to a Chinese Workers Memorial statue that commemorates early Chinese immigrants, workers, and veterans in Chinatown. They suggest that the site be used to develop social housing and community facilities.

The site in discussion is in Vancouver’s Chinatown, at 105 Keefer Street. The developer has submitted three rezoning applications since 2014, asking for an increased building height to 12 or 13 stories. However, each of their applications has brought heated debate. Some people agree with the plan for a high-rise development, that will attract more people who have higher spending power, but a large number of organizations and community leaders have said that they oppose the project. Yesterday, they even gathered together to appeal to the three levels of government to purchase the site, eliminating the opportunity to use the site for business and commercial development.

King-Mong Chan from the Chinatown Concern Group points out that Chinatown is continuously losing its unique character and distinction from a community suitable for low-income long-time senior residents, to a more and more gentrified neighbourhood. Some heritage groups have listed Chinatown as an endangered neighbourhood.

Lily Tang who has lived in Chinatown for many years says that recent changes in Chinatown have been too large in scale. You can no longer buy things you used to be able to find, and the atmosphere of friendliness and harmony in the community has disappeared. She thinks that the real estate developers are to blame; they keep circling around Chinatown, propose high-rise towers, and attract an influx of high-income residents. She says that the preservation of Chinatown’s original unique character is equally important to Chinese and non-Chinese people.

Jenny Kwan also said that before the current Liberal government was elected, they had promised to introduce some new policies. She hopes that the new policies will include a re-engagement with the building of social housing.

Chinese Canadian Military Museum representative Howe Lee noted, the Chinese Workers Memorial is an important community landmark for their organization of Chinese Canadian veterans. They hold an annual commemoration event at the memorial on Remembrance Day, and he hopes that the small plaza beside the memorial can be expanded, rather than overshadowed and imposed by a high-rise tower right next to it.

Canadian Alliance of Chinese Associations executive president Wang Dianqi said, his organization fundraised for rehabilitation work at the Chinese cemetery in Barkerville previously, and continues to support Chinatown’s organizations in their efforts to protect this site.