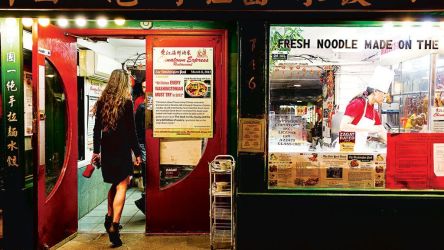 Thirty years ago, if you wanted the best Chinese food in the area, you’d go to Chinatown. The DC neighborhood around Sixth and H streets, Northwest, offered a wealth of Szechuan and Cantonese eateries, many of which were regulars on our annual best-restaurants list. You could get your shopping done, too: Markets thrived, and families who’d moved out of the neighborhood would return to stock their kitchens.
Now? The food markets are gone, and if you want the area’s best Chinese food, you go to Rockville.
How did Chinatown become virtually devoid of anything Chinese? By losing most of its Chinese residents. In 1970, there were roughly 3,000; today, the Mayor’s Office on Asian and Pacific Islander Affairs sets that number below 600. Many are elderly residents of two low-income housing developments.

Washington’s top ethnic-restaurant pockets (Falls Church’s Eden Center, Annandale’s Koreatown) are located in immigrant communities—which leads us to Montgomery County, where roughly 15 percent of the million-plus population is Asian, according to 2014 census data.
For longtime Chinatown residents and businesses, the exodus from city to suburbs was sparked by the ’68 riots and continued through decades of construction that took over sections of the neighborhood—the building of Metro in the ’70s, then the first convention center in the ’80s and the Verizon Center in the ’90s. Meanwhile, many Chinese opted for the burbs for the same reasons as everyone else: stronger schools and better government. Rent increases then priced out businesses and residents.
A handful of Chinese restaurants relocated along with their customers, such as Kam Fong Seafood Restaurant, which moved to Wheaton in 2009 and became New Kam Fong. Owner Karen Lee says business is steady: “In DC, you get a lot of tourists. We have local people here.”
All of Chinatown’s most lauded restaurants are gone. China Inn, which opened in 1939 and closed (as Lei Garden) in 2007, will become a micro-hotel. Szechuan by Tony Cheng—which gained national attention when President Carter dined there and invited Cheng to cook at the White House—is a parking lot.
In 2013, the Washington DC Economic Partnership, a nonprofit that promotes development and business, counted 30 Chinese or “Asian-themed” businesses in Chinatown—a number that could include Thai Chili in the Verizon Center and Daikaya, a Japanese spot.
Sure, you’ll still see Chinese lettering outside Starbucks and Hooters—it’s the law. But architect Alfred Liu, who’s responsible for the neighborhood’s most emblematic symbol, the Friendship Archway, says even that is a farce: “[The DC government doesn’t] have any cultural training. They misinterpret the culture. The Chinese by the sports arena looks like children’s writing.”
As a response to Chinatown’s dwindling identity, the DC Office of Planning instituted the Chinatown Cultural Small Area Action Plan in 2009. Proposed initiatives included a Chinese culinary school, street markets, and Asian retail. As of March, 35 of the 46 proposals have seen no action or been canceled. One success: the launch of a free bus that runs to Asian groceries in the suburbs so the remaining seniors can shop.
“Chinatown is a themed place,” says Raymond Wong, who teaches at the Chinatown Community Cultural Center. “It’s like Disneyland as far as authenticity is concerned.”